Thanks to those of you who gave distro suggestions! Most came in while talking to people personally, but in the end...

Check out these specs. For me, it triggers a bit of nostalgia. 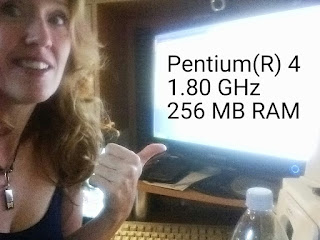 To explain to my friends that this computer was "a little old", I went to dinner with them wearing my flash drive necklace, a modest 16GB. My necklace is a tool that comes in handy so often. (Get one here if you want.)

Everyone at the table, except me, was French. They all have the ability to laugh easily so I say, "So, my necklace has more than 62 times more memory than your desktop computer.” Lots of "Ohlala"s ensued, much laughter.

They are wonderful people and wow, that dinner was delish. Thank you!

The thing I didn't mention – the coolest part – is that even though this computer is so old it will still function well with a solid Linux OS.

This is flipping amazing.

Of course it would need a 512 MB memory stick which might be hard to find, then I would need to open the case. But TSA took my screwdriver. Again. They take my screwdriver only 50% of the time, good enough odds for me so continue bringing them with me.

For the last few days I have waited for my friend to find the right size screwdriver. This has given me time to think about what I am about to do. I am sure there are spiders inside the tower and I am planning to invade their home.

It is fun to do upgrades, but only if I have the time. Like many other Linux geeks, it is often only briefly appealing to wrestle with an ancient machine built for XP.

But I hate e-waste with a passion. I am based in Berkeley, California where the joke is, “If there's a gum wrapper on the sidewalk, someone will try to recycle it.” But. Time.

Then it occurs to me – if I fix this guy's machine I will forever be responsible for tech support for it. Shivers go up my arms.

Spiders don't bother me but the thought of tech support on a poorly built machine. Horror.

And that is why we built a company that does all the R&D and support for new Linux-only machines.

So now I am taking one last look at this tower with a floppy drive (a freaking floppy drive!) before my friend moves it to a spot even deeper in the corner. The spiders will quickly move back in, I am sure, and make stylish French webs that look artistic. That is good enough recycling for me.
Posted by Unknown at 9:53 AM